The rifle holds four in the magazine and with one in the chamber you have five very powerful shots. If you need more than five with this gun, you are either a terrible shot and would be better served by throwing the rifle at the enemy, or you are up against some seriously committed enemies, or your people skills are lacking and you have angered many.

A little bit about the ammo. 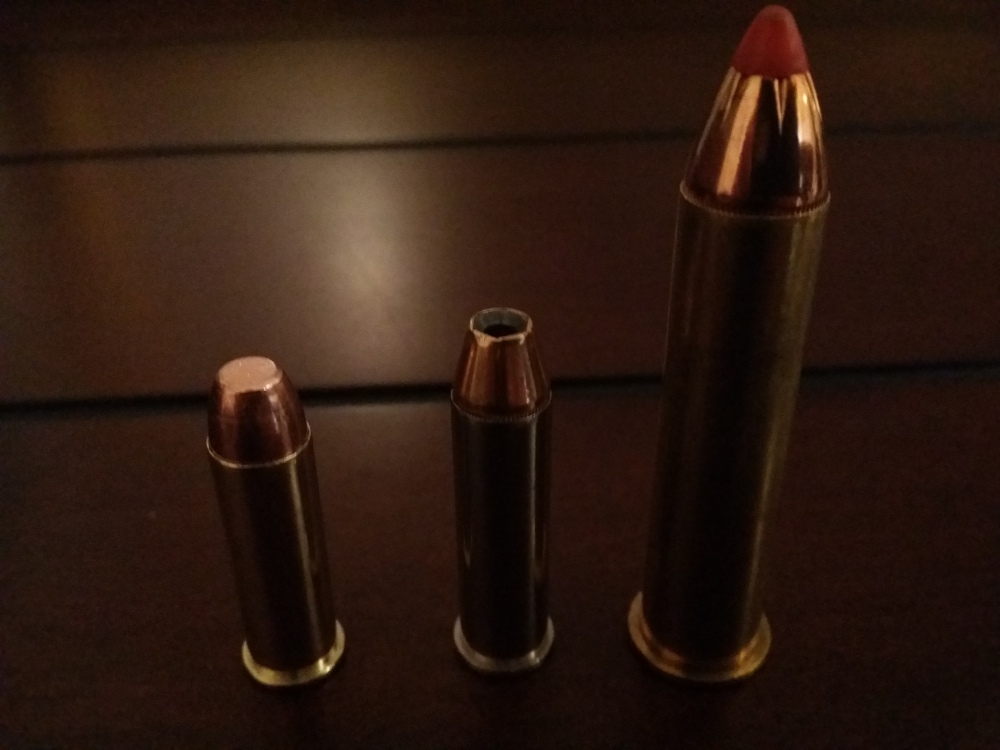 In the image above, I have on the left a .38 Special. This is the round I am typically using when I go to the range with my revolver. In the center is a .357 Magnum, hollow point for home-defense. This particular cartridge is actually made for home defense, it has a lower grain count and so the bullet is a tiny bit less hot (it won’t go through the wall and another wall and the refrigerator to kill a bad guy three houses down). The hollow point expands on impact to further slow the bullet. The cartridge on the right is a .45-70 govt. This one is a 300-grain cartridge, but I have since found that you can purchase .45-70 in a 405 grain. I actually found out that loaded for bear was a real thing after I bought this rifle. I thought it was just an expression but .45-70 can be a bear hunting load with the proper grain count.

My purpose for buying the rifle was actually hunting. I want venison. I have since been informed that the round is a little bit more powerful than what I need for Texas deer. And as I make no claims of expertise in the subject, I can only agree. However, I plan to also hunt elk and perhaps buffalo in the future as well, and with this rifle, I will not need a different gun for the different hunts. Being unable to secure a day lease to hunt for deer this year, I am working on arrangements to hunt for wild pigs, and I have been told this is the perfect ammunition for that. We shall see.

In all, I am very happy with the rifle. It is a great weapon that is well built and the ease of use has me hooked. The learning curve was a lot easier to manage than the revolver. This is a product I can recommend.