I receive a lot of email related to what is published on this blog. I think it is funny that people express themselves so freely in the format of an email, but few people comment on the actual articles themselves in the space provided. But that aside, I did get a few emails covering the same question, and I felt that, as I am completely unashamed and willing to put whatever I think out there for public praise or ridicule, I would answer here on the blog. (It isn’t that don’t care what people think, although that is a part of it, the fact is that I always consider the source. Not all opinions need to be considered…)

The question is this, “Why does the top of the page say, “Practical Martial Arts” when there is a photo of you, surrounded by fire, performing some very impractical techniques from Hung Gar?” For a start, practical is in the eye of the practitioner, but we can save that for a bit, and take this one step at a time.

Well, in order to answer this properly, we must first define what the word practical means.

When we speak of “practical martial arts” what should come to mind immediately would be a martial art that can be applied against the types of attacks that a person is likely to face in our modern time.

Most martial arts are very capable of dealing with the types of attacks found within the system itself. This is, of course, how it should be. After all, in any training hall around the world, the people you train with the most are going to be students of the same style or system, and therefore should be most used to using and defending against attacks of the type used most by that particular style or system. If the style is not suited to defending against the very techniques it presents to the practitioners, then one must question the system and its validity. (Please don’t try the line that the techniques are so awesome that the style cannot even defend against itself).

There are many reasons that people take up martial arts. If your reason for training includes gaining the ability to protect yourself in a fight, then you need to understand practical application.

The reason I throw in the term practical application, instead of simply saying application is this: if the techniques are not applicable against the techniques that are likely to be used against you, then your style is not practical, and if it is not practical, then it will not serve your purposes of self-defense/self-protection. It may work wonderfully against ninjas falling from the sky, or warrior monks riding on the backs of dragons while eating poppy-seed muffins, but is that really practical?

So I will now come back to Hung Gar, and the question, Is Hung Gar a ‘Practical Martial Art’?

The honest answer to this question is going to be the same as if the question were asked about nearly any other martial art.

Hung Gar is practical if it is taught to be used in a practical manner.

When the techniques of Hung Gar are either only drilled in the forms, or are taught as being response to other techniques typical only to Hung Gar or other Southern Chinese martial arts, then no, it is not going to be a practical martial art.

When one trains only the forms, regardless of martial style or system, there is going to be a lack of depth. Even when the student (or in some cases, the instructor) is convinced that they understand the applications of the form, there remains the fact that these applications will remain nothing more than theory, until practiced and drilled repeatedly. And as long as they remain theory, the student will be completely unable to use them in the real world.

Equally misleading is the situation where the trainee is taught applications to the individual techniques that are going to only be used against techniques unique to the style, system, or region and time of origin.

The types of attacks one would be likely to face in 1800 south China are almost certainly different from the types of attacks one is likely to face in an alley in 2012 Chicago. And the odds of being attacked by a Hung Gar practitioner are probably pretty low. I don’t have case studies and hard statistics to back this up, but I am still pretty confident in the statement. Some of the attacks could be similar, or possibly even exact, but the majority probably would not be related at all.

There are several lists out, but the most common list out states 36 habitual attacks. I believe that list is copyrighted, and so do not wish to go too much into that list.

Let us start with the photo from my banner at the left. This is an example I have used before. There are a variety of situations where this technique could be applied.

The lower hand is being used to redirect an incoming technique, and the upper hand is striking/grabbing (it can be practiced in a variety of ways).  The redirect can be trained for use against either linear or circular attacks, given enough practice.

But the real key is just that, practice.

Too often, martial arts instructors and students allow theory to take the place of practice, and this cannot but end poorly. If we allow theory to take the place of actual practice, we end up as those very caricatures of martial artists that we all despise. Every single martial artist on the planet wants to be taken seriously. Those that are the butt of the jokes don’t realize that it is them that are made fun of, and sharply deny it if they are told.

The drills that I use to teach the above technique are pretty standard in the world of practical martial arts. I follow a process where the student will first learn what to do with the hand doing the redirection. This is started from the most elementary levels of a static arm held out in place of a punch. Later, motion is introduced to the set. Next we practice the counter-strike that is executed here with the hand on top. This can be done as a grab of the throat, or as a strike to the throat, or face. In either case, it is important to remember that the key is going to be in practice. You need to practice repeatedly, at each level, and from different angles against an increasingly resistant opponent. Grabs to the throat and strikes to the head are dangerous. Care must be taken to prevent unneeded injury to your training partners. Standard rule of thumb applies. With a partner, work on the speed and precision, and when you work for power, use a heavy bag or a mannequin bag. Eventually, different angles are introduced to make the application three-dimensional. There is always an evolution and a process. 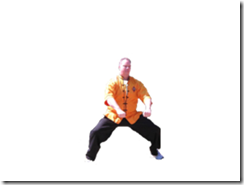 Next we find (pictured to the right here) a bridging technique called “Subduing Bridge”. The term “subdue” refers to gaining a physical control over the opponent. The best reference I was given on this technique was when Onassis told me to “do it like you are drowning someone”. Since that time, I have never been able to perform this move without having that image pop up into my mind’s eye.

What is probably obvious to most should be the probable application of grabbing an opponent and pressing them downward. The footwork would have to be changed from a standard horse stance to make that work very well, but all of this is discovered in practice. Again, as with everything we train, we start from rudimentary levels and work toward a more free and live” simulation of the technique being used in a self-defense/self-protection situation. When seen as preventing a takedown, and practiced as such, one finds only slight modifications needed to make it workable.

Last I will address the Kiu Sao, or one-finger bri

dge hand, common and seen throughout the Hung Gar systems worldwide. The hand position is quite unusual when you are considering that this is supposed to have a martial or fighting application. To form the one-finger bridge hand position, you start with a tiger claw hand position, and raise the index finger. There are differing ideas on the precise thumb position. There are schools that teach that the thumb should be held close to the palm, others teach that it should be outstretched as far as possible from the hand. As the base for the arguments tends to break down into Qi flow and not actual application, I will say that which way is correct is going to depend entirely on what you are teaching as the application. In either case, in application, I strongly recommend that you do not opt to raise the index finger when practicing practical applications. The technique is intended to be used as a strike or a grab (train it both ways). The first time someone grabs your upraised finger, or strikes it, you will understand why.

In the series of techniques from Gung Ji Fuk Fu Kuen form, from which the above photo is taken, there are some great applications to be found. There are a elbows and redirects, and strikes that flow directly off of the redirecting techniques. Fantastic, wonderful, GREAT stuff. But the bottom line that must be understood – for any martial arts application to be useful, it must be practical. And no matter how practical it may be, if it is not trained, it will be useless.

In closing, I will say that I find Hung Gar to be a practical martial art. It does contain things that are for show and street performance, but there is a lot of value to be had for the practical minded martial artist. My advice for any martial artist of any style or background is the same. Find the practical application, and train it extensively. There is no way you will end up regretting the time it takes to learn how to use your style or system the way it is meant to be used.