This post is a bit outside of my normal topic range. But seeking fame or even just attention on social media can put you in danger of a whole host of problems, from jail time to death threats. Today we are going to look at some social media attempts at fame that went wrong. We will start with the disgusting and very lame attempts at getting a few social media likes and shares, then we will move on to the harmless stunt that provoked some idiots to violent threats.

Social media has done a lot to expose a ton of mental illness in our modern society. One need only take a look at the recent rush of idiots trying to outdo one another with felony food tampering to see how bad things are out there.

The first I saw was, what I have read to be, a teen girl popping a lid off of a carton of Blue Bell ice cream, licking the ice cream, and then putting the lid back on the container, and putting it back on the shelf

Really disgusting. And for crying out loud, it was Tin Roof Sundae!!! Buy it and eat it! Of course, we all knew there would be copycats, but some of us were warning that there would also be some one-upmanship going on as well.

Not wanting to be left out of the stupidity, there was this guy: 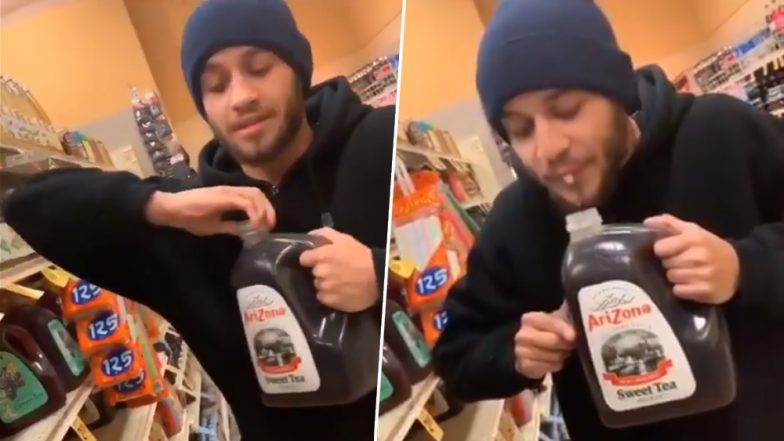 This knucklehead spit in some tea and put it back on the shelf. I do not have the words to describe my disgust. I read somewhere that he works as an Indie Wrestler. Maybe a few too many pile-drivers on the hard concrete?

Of course, some people need to find a way to take ignorance off of the charts in their quest for fame. We had this happen next: 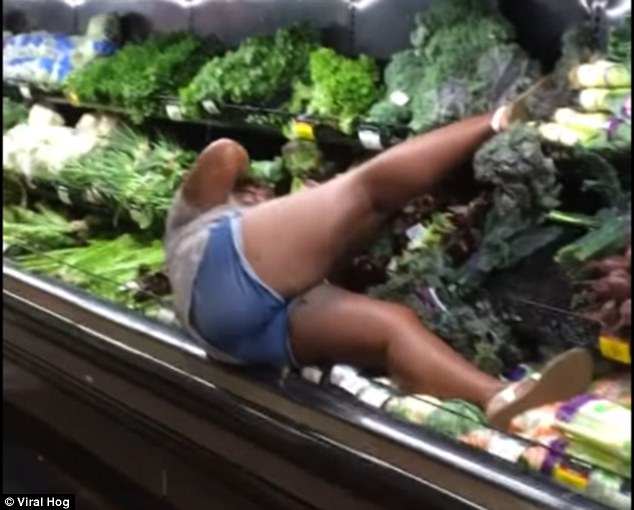 Yes, that is a person rolling around in the vegetables like a pig in slop. The video version shows this person also rubbing the veggies all over her body. These people are sick.

All of these are a felony. Prison time as a result of setting common sense and human decency aside to try to rack up a few internet likes and shares. They seem to have no concern over getting arrested, they want to be seen.

Unless humans are smarter than I think, this will continue to escalate until someone gets hurt by a store owner.

And for this last one, you will need to set aside your political indoctrination and stay with me in the real world. If you find yourself getting all triggered or whatever by what follows, close this webpage and don’t come back.

There was a short run on social media of parody by a kid going by the name Mini AOC. AOC being the politician Alexandria Ocasio-Cortez, known for exaggeration and hyperbole. Mini AOC was an 8-year-old who began making videos and sharing photos exploiting this habit of AOC the grown-up. Here they both are:

People, proving my low estimate of their sense of humor to be correct, actually doxxed (publicly shared personal information, the kid’s real name, address, family phone number, etc online). Bad actors showed their support of AOC the grown-up by harassing and sending death threats…TO AN EIGHT-YEAR-OLD KID! I don’t care what your political doctrine is, if you feel justified in sending death threats to an eight-year-old, you belong in an insane asylum. Leave kids alone.

True, the parents allowed her to do these videos and pictures and may have had some ideas of fame going on. This was short-sighted and did not take into account the ease that people in our time have in seeing disagreement as an excuse for violence and threats of violence. The instructor in me, the teacher in me, the tired old man in me who has lost faith in human decency shook his head the first time I saw Mini AOC. But nothing happened right away, and I dared to hope that maybe parody might be becoming acceptable again. People never fail to affirm and reaffirm my worst evaluations of their species.

See, I have been on the receiving end of death threats. There is a ton of stress involved and more worry than you can imagine. When I read that Mini AOC had deleted all of her social media and content due to death threats and harassment, I knew what that family was going through. It isn’t pretty. I hope that none of the thin-skinned individuals who were making the death threats had any intention of carrying them out, but in our day and age, one can never be sure.

Once again, I ask you to please call back the crazies on your side of the political spectrum. When we reach a point of death threats, something is wrong, and when we justify death threats against a kid, there is something terribly wrong. If there is anything that you find to be good and right in the world, please focus on that. You might think you want fame, but you won’t want it once you have it. And if you really want it, do something worth being famous for. Finally, if you are going to try to be famous, consider the downside, don’t do it through your kids, and remember the volatile political climate we live in. If people are willing to threaten to kill an eight-year-old, I don’t think anyone is truly off-limits. Be careful, and be nice.

The next few articles will be about movie fight scenes and how they relate to the real world. I want to have fun and not tackle such seriousness again for a while. Take care of each other!