I have added to the armory (again). I have been looking for a high-end Bowie knife for a while. I own a good budget Bowie but I have never owned one that would be good in a survival situation. The one I have is razor sharp, but it is made of a somewhat thin piece of stainless steel. A defensive weapon in certain limited circumstances, sure. But if I needed to hack off limbs, it is not suited to the task. I wanted a Bowie that knife screams “Texas!”

While I have been a fan of Cold Steel products for a long time, I have never been a fan of their price point. I have more budget weapons than high-end for a reason. So when I ran across a flash sale, I jumped at the chance to save a little over 80%. Of course, I have been sweating the purchase from the day after I placed the order when I read that Cold Steel sells off factory seconds, the imperfect blades, to resellers who will sell them at prices much lower than Cold Steel. I was unsure what kinds of imperfections I was going to get stuck with.

I got lucky, this blade is not a factory second, and it has no known imperfections. I have not yet chopped down a tree with it, but I will put it through some tests and see how strong it is. For now, I can say that this knife is a beast.

It is a 17″ Bowie knife, high carbon blued steel blade, full tang with a rosewood handle. The sheath is wood and leather and very well done. The belt loop also has a swivel feature, which is said to allow the knife to hang freely as you move, but it reminds me of the types of rig used in old western movies by the quick-draw types who would throw the knife in a gunfight. Rather than riveting the handle onto the steel, it is screwed on using double screws, male and female. I know, I know; you have been told over and over that there are 75 genders. But when you are talking about screws, there are only two. It was pretty dang sharp right out of the box. While there is a video out on the knife by Cold Steel claiming that the “pistol grip” handle is designed to aid in the thrusting of the weapon, when I look at the part they are calling a pistol grip, I don’t see ergonomic design to aid in a deadly thrust, I see a skull crusher, but what do I know?

But I am guessing some of you just want pictures of the knife. Here they are: 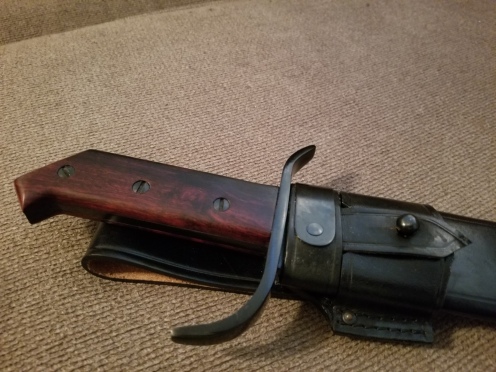