The topic for this essay is social media. Specifically I am going to write about the way people lose a lot of social intelligence when they participate in social media.

At the time of this writing, a teacher in the Duncanville school district (right outside of the DFW Metroplex in Texas), Vinita Hegwood, has resigned her job as an English teacher after a big dust up resulting from a profanity laced and racially derogatory post she placed on the social media website twitter. 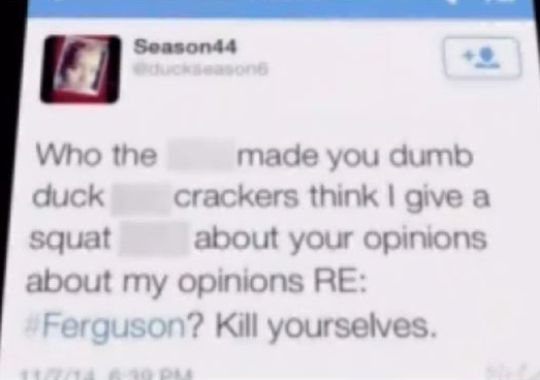 She went on to add:

It would be easy to go on a rant about an English teacher butchering the English language in the manner done above, but I see something much more serious going on and it is this that we need to start with.

People do love social media. It allows them to post rants from the relative safety of their own home, and speak their mind on any topic they wish. Sometimes they wish to be heard, and sometimes they are seeking validation of their opinion through people clicking “Like” or “Retweet”, or whatever. Sometimes people forget that while we do have freedom of speech, we do not have freedom from the consequences of our words or actions. This teacher placed this rant out in public, and it caused her to lose her job, and she may have trouble finding work as a teacher again. There were comments in the news stories about how she was expressing her freedom of speech, and others claiming that they would follow her wherever she goes to make sure she never teaches again.

How easy it is to forget civil dialogue!

I see this as an easy example of how people slip into their fantasy personas and spout hate online. I have actually had a draft of this article under work for some time now and this news story made it possible to give a true and simple example.

In case there is any doubt about this being a fantasy persona, please remember – this woman is an English Teacher! Do you honestly think that this is a good example of her typical classroom jargon? I sincerely doubt it. Teachers are watched, observed, evaluated regularly, and have parents calling the school over even the most insignificant concerns. I would be willing to bet this side of her never surfaced in the classroom. I also feel confident in this because of seeing so many people with an online persona that is not at all true to their real self.

Here is her message regarding her resignation:

“I wish to express my regret regarding the controversy over comments that I made on social media on Friday, November 7.  I am deeply sorry for the offensive and unprofessional comments that I made on my personal Twitter account.  In making those remarks, I was reacting to a series of threatening and racist attacks against me by strangers who disagreed with my expressed opinions on Ferguson, Missouri. I allowed myself to respond emotionally and impulsively. My reaction in no way reflects the standards to which I have held myself and my students for the last twenty years of teaching. I accept full responsibility for my actions, and I regret the embarrassment that it has caused the school district.  I believe that it is in the best interests of the district that I resign my position at Duncanville ISD effective immediately.”

This represents a much more professional correspondence than the twitter message did, obviously. But it also gives an insight into the way she more than likely communicated in the classroom.

What this also does, though, is it gives a very clear distinction on how far people can go into their online persona. It shows how much emotion can change your behavior, especially when you forget that there are consequences.

For me, the early manifestations of the online alter-ego were found on the martial arts forums. Time after time there would be a visit from these trolls who would make all kinds of anonymous threats and talk very big while hiding in their parent’s basement. But this was before social media really took hold.

Everyone is an expert

Social media has changed the face of the internet and society in many ways. I find it truly disturbing that with an internet connection and a social media account, so many people believe that they are suddenly an expert in everything.

What? A police officer shot someone! I better post my opinion on that! I am, after all, an expert on use of force decisions by police officers! The world needs to know what I think about this.

What? There is a lonely polar bear living on a tiny ice cube that is all that is left of his home? I must post my opinion about this as well! I am also an expert on polar bears and climate change!

Citing the example that got the teacher in trouble; while she was in essence stating that she didn’t care about the opinions of other people on the subject of the shooting in Ferguson, Missouri, she was neglecting that her own opinion was nothing more than an opinion as well. And can you see how easy it is to forget that your own opinion is as meaningless to strangers as their opinion is to you? This is important but we lose sight of it often. Speaking in terms of self protection; this is exactly the type of selfish, short-sighted behavior that gets people in trouble. When you firmly believe that your opinion is the only one that counts, and any who disagree are vile idiots, bad things are bound to happen.

Far too many people are allowing the news media to shape their opinions about stories, and are allowing themselves to forget that the news media is a business that makes money off of your continued viewership. They are experts at stimulating the hot centers (emotional centers) of the brain. They feed you part of the story and get you to have an emotional reaction, and they have to feed that to keep you coming back for more. There was a 5 year old girl shot and killed when a gang drove up on a house in Milwaukee and opened fire, killing the girl as she sat on her Grandfather’s lap, but it went all but unreported. Your homework assignment is to track down this story, and try to figure out why it was not more widely reported. The answer may surprise you. Or it may not.

People often take the opinion offered to them from their “news source” (wherever it is you get you news is irrelevant; it is a common practice to sensationalize) and suddenly they are an expert. They post this opinion on social media and if anyone disagrees with them, they are instantly branded as an idiot, racist, homophobe, islamophobe, or whatever the media has told them that those of a different opinion are to be labeled.

Quick note – watching a news story does not even come close to making you an expert on anything. You want to be an expert? Good! There is a time tested method of becoming an expert. Study and work your butt off.

Agree with me or I will take my ball and go home!

We also seem to have lost the ability to disagree. If you look around on social media you see this strange attitude of “If you don’t agree with me on (whatever topic you care to insert here) then I will block/delete/unfriend you.”

Where does this make any sense?

I don’t have to agree with you on everything to like and respect you. I think it is unwise, and to be frank, immature to insist that everyone you associate with be in lock-step agreement with you or you cannot be their friend. But again, there is that social conditioning that has taught people that if they don’t agree with this or that promoted opinion, then they must, by default, be a racist/bigot/homophobe/islamophobe. And who in their right mind would ever possibly want to be friends with a racist/bigot/homophobe/islamophobe?

It would probably be a good thing if people could learn to take a moment and breathe. When you are about to post something on social media, be sure that it is not something that might cost you your job, or even your career.

Social intelligence is the ability to understand how your actions impact the way people act toward you. You might be thinking to yourself that people will think you are cool or tough or whatever if you post this or that opinion about whatever the “hashtag” hot topic of the day is, but you might have a bad misstep. Just as a person can make a single mistake that ends up sending them to prison for a few decades, so too a person can make a comment on social media that has a negative impact on their life. Cited in this article is just one example of a person losing their career over a social media rant when a small exercise of social intelligence could have prevented the entire event.