The study of practical application within the Japanese and Okinawan Martial Arts seems to have begun in earnest with the debut of the UFC. In this event, on a huge stage, the traditional striking martial arts got it handed to them in short order, and everyone who had any sense saw immediately that we needed to go back and take another look at what we had been taught and what we were teaching.

For the Japanese and Okinawan systems, this study took on a very serious note and many open minded practitioners saw that much of the problem lay in a lack of objective understanding of the techniques themselves. Where it had been standard practice to teach a block as a block, these thinkers began to see blocks as strikes. The chambered hand, long taught as being an elbow to the ninja that had just jumped onto your back, was seen more and more as being a limb control/repositioning of the opponent type of maneuver. And as this study goes on, much is being re-evaluated and understood to have a much more practical use than had previously been taught.

Within the Chinese Martial Arts, there was a lot of resistance to the idea that we didn’t know what the techniques were supposed to mean. As I mentioned in a previous article, for many years I had taught that a particular technique was a swinging strike to the underside of the jaw, when in looking at things from a more practical perspective it is a scoop to the underside of a kicking leg that allows you to (quite easily) dump your opponent onto his backside.

The people who resist have pointed out to me on a regular basis that the techniques of Hung Gar need not be seen as anything complicated. They love to point out the tiger strikes as their support for their position. 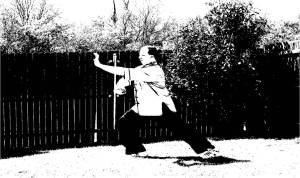 In Hung Gar, the tiger strikes are quite obviously a redirect with one hand and a strike with the other. And on the surface, there is nothing complex. I think, at least to me, the real complexity would be readily apparent to anyone as soon as they try to use these tiger strikes on a fully uncooperative opponent. The first time I experimented with this, I was amazed at just how difficult it is to pull off the techniques properly, and have them deliver as promised, when the opponent is doing everything in their power to prevent you from being successful. It took quite a bit of training to understand some of the more subtle aspects of timing, pressure, and adaptation required to make the techniques successful. They payoff was not just that I developed the ability to use the techniques. Better still was that I understood how to use them well enough to effectively teach how to use them.

There need be no insecurity in this study. In fact, insecurity should be the last thing you feel. Each time out, I got better at it, and eventually made it look and act like I was told that it would.

So, once again, we find ourselves back at the basic idea of training. No matter how basic and obvious the application may seem to the naked eye, unless you get out there and work until you can apply the technique on an uncooperative opponent, you will never be all that you think you are.

Here are some training ideas that I found useful:

I hope that the point I am trying to make is clear. Understanding that this is the probable application of this or that individual technique helps only a little. You need to take time and drill the technique. A surface understanding is going to do you no good. There is no replacement for experience. There never will be. Train the use of the techniques more than the mere repetition in the air. You do need a live opponent. Where many schools go wrong is in not trying with a partner at all, usually out of never seeing the initial stage of slow technique as being “step 1” of the process), or in jumping to full speed too soon.

When training for application, one must start very slow, to learn placement and footwork. Then pick up the pace of the entire execution. Once this becomes proficient, then the opponent will begin to offer resistance to the execution, and the real learning will now begin.